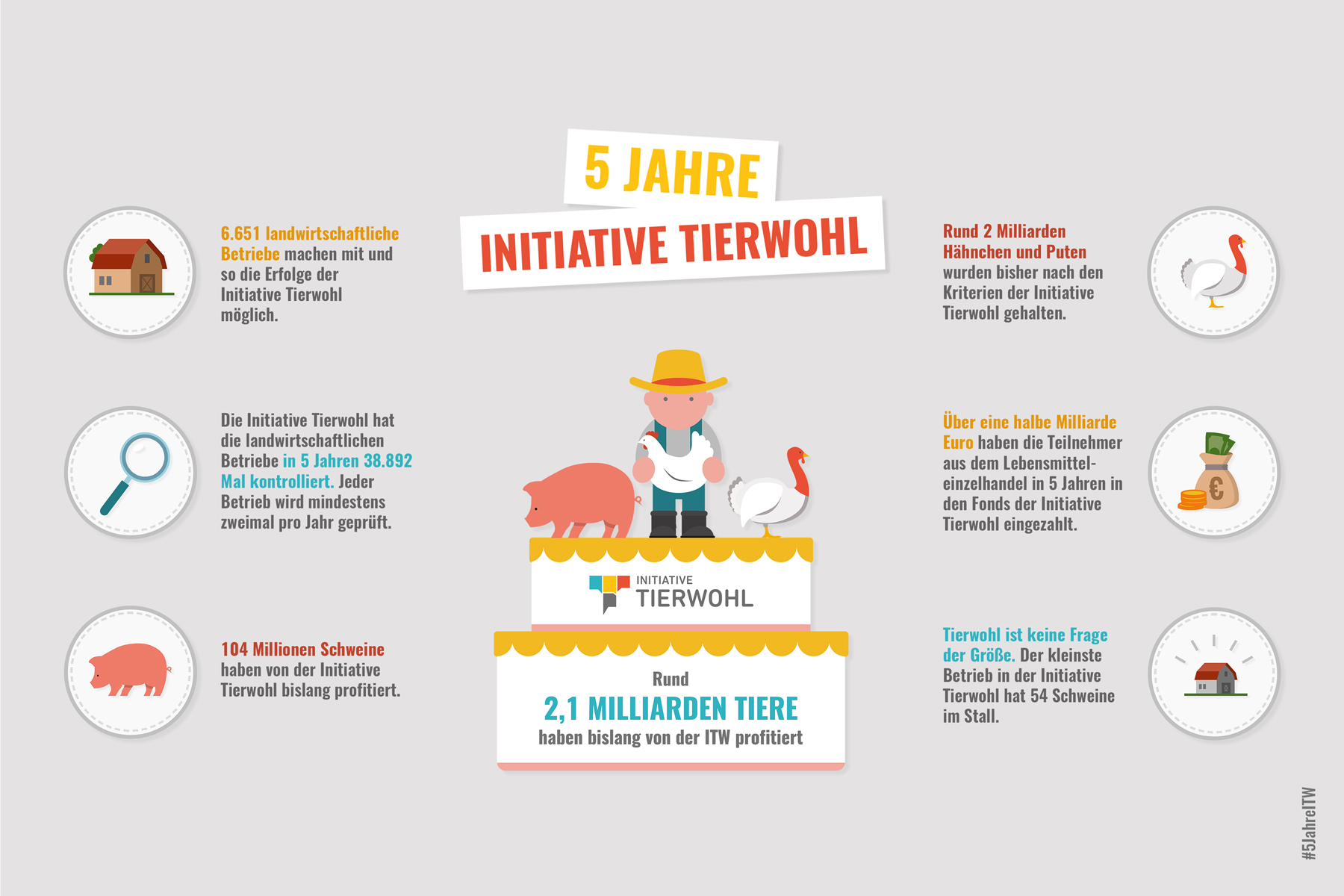 Stakeholders from the agricultural, production and trade sectors got together and resolved to collaborate on a project to improve animal welfare and increase innovation in agriculture exactly five years ago, when the ‘Initiative Tierwohl’, a nationwide animal welfare initiative driven by producers and traders, was born. This presents the ideal opportunity for our very own Animal Welfare Initiative to take stock of what the Initiative Tierwohl has achieved so far.

Pretty much, apparently. According to a recent forsa survey, two thirds of respondents are familiar with the initiative and more than 90% consider it to be a good or very good idea. Moreover, the label has made its way into consumers’ awareness—indeed every third respondent deliberately notices it on the packaging. Today, about 70% of poultry and 25% of all fattening pigs in Germany benefit from the improved standards, including 10% more space and additional manipulable materials. According to the ITW, in excess of 100 million pigs and more than two billion chickens and turkeys have now been bred, raised and slaughtered in accordance with the initiative’s guidelines.

In an interview with German newspaper Die Welt, ITW Managing Director Alexander Hinrichs stressed that every consumer must be able to opt for improved animal welfare when shopping. It is a pity that the food service sector has so far largely held back from commenting on animal welfare and how it’s financed.

The industry initiative’s next round of financing will commence in 2021. However, the financing model is set to change. To date, the major food retailers have paid €130 million a year into a fund that was distributed to participating farmers. This will change as from next year: future financing will be directly from the market. Slaughterhouses would then pay participating pig farmers a fixed premium, which currently amounts to €5.28 per animal. Furthermore, the initiative plans to significantly broaden the scope of the meat labelled with the ITW logo on the refrigerated shelves of supermarkets. This will then be extended to sausages in 2022.

Even though the measures are considered to be minimal in many critics’ opinion, they are an important step towards achieving increased market penetration. And every step that helps to improve overall animal welfare is a step in the right direction. There has to be continuous development, where all parameters are constantly reassessed, when it comes to animal welfare. In fact, many innovative solutions, especially in animal feed, actively promote animal welfare.

Click here to learn more about what feeding can achieve.